Now that we've covered most of the topics based in the subject of transsexuality I'd like to review what we've gone over. Hopefully if you didn't know much on the topic before hand you learnt something by reading my blog. I've explained my point of view on the topic various times but now you've been able to see and reflect on how other people view transsexuality and how they related to their lives. Most of the negative points of view were based mostly on bigoted opinions and illogical arguments. Some people are closed to the idea of transsexuality solely because of their religion, while others try and find a more scientific reason for as to why they should not support it. The idea that transsexuality is based in mental illness could be very possible, especially considering the fact that most transsexual individuals after taking their sex change operation were found to be less happy and more prone to suicide. My opinion on transsexuality is based on the idea that the state has no right to dictate what an individual chooses to do with his or her body, as long as no one else is harmed. Not all medical professionals believe that gender reassignment surgery should be considered taboo and the growing acceptance and understanding of the medical community helps to lend credibility to their practices. Though some places still have yet to accept the LGBTQ community, we’ve still made amazing progress from the 1950’s. In time perhaps we can hope for the complete assimilation of LGBTQ men and women into our society.
Posted by Dante Willis-Romano at 12:55 No comments:

Transgender at War and in Love

This Op-Doc video profiles a transgender airman named Logan Ireland, who recently completed a deployment serving as male, the gender he knows himself to be. Remarkably, after telling his leaders and some peers that his sex was assigned female at birth, he received their support—despite military policy that prevents transgender people from serving openly. Meanwhile, his fiancée, Laila Villanueva, who was assigned male at birth, has a similar scenario, but works without the support of her command.

Their dreams of serving in the military until retirement, having a home, and creating a family are all on the line simply because of how society and United States military policy discriminate against transgender people. Logan and Laila are aware that by coming out publicly in this film, they could be discharged.

The ban on transgender people in the military is not a law: It is based on outdated medical regulations that consider transgender people to be psychologically impaired. If the military updated its policies to reflect current research standards, transgender people would not be considered unfit.
Back in 2010, I advocated for the repeal of “Don’t Ask, Don’t Tell,” the law that banned lesbian, gay and bisexual people from serving in the United States military. But when I realized that it did not include transgender people, I was outraged. We had succeeded, but the mission was incomplete.


All soldiers, sailors, airmen and marines risk their lives fighting for Americans’ right to life, liberty and the pursuit of happiness. Yet American transgender troops are not afforded the same freedoms they are so boldly protecting. The story of Logan and Laila is not over yet. We’re hoping for a happy ending.

The Pitfalls of Gender Reassignment Surgery 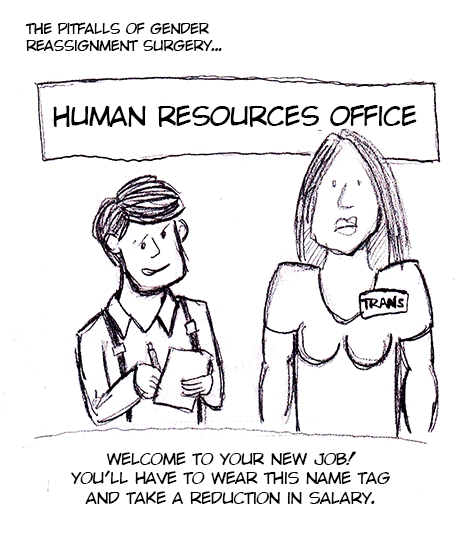 Posted by Dante Willis-Romano at 12:41 No comments:

Should Gender be Recognized by the State?

Should gender be removed from birth certificates in Canada? A group of British Columbians says it should and is taking their fight to the province’s Human Rights Tribunal, which has agreed to hear their case.

Morgane Oger, the chair of the Trans Alliance Society in Vancouver, and one of the complainants in the case, argues birth certificates should only contain things that don’t change, like the time and place a person was born and their parents’ identity at the time – gender, Oger said, should not be included.

“Yet my birth certificate, that I’ve had to hand out a number of times says male on it, until now. So now my proof of identity can say female. But all the documentation in the past has said male.”

Many people don't understand that there's more than just a good and bad to transsexuality, in many cases both sides of the argument have a very valid viewpoint. Studies have shown that it's more likely for a transsexual individual to commit suicide after they've had a sex reassignment surgery. I personally believe that all people should have the right to choose to do whatever they wish with their bodies, but I also believe that transsexuality may be rooted in some form of mental illness. Now many people look at me with strange faces when I say that transsexuality is something that is wrong. The only reason I would say this is because if you're transsexual individual that means that you're not in the right body therefore there is something incorrect with your person that should be able to be solved or cured. In fact the best alternative would be to have no transsexual individuals at all because that would mean that everyone is in their right mind and body. I personally know someone who is transsexual and they only realized it once they were around the age of 17. They told me that it wasn't a sudden realization but a slow steady process whereas they came to understand that they felt off about who they were. Now it wasn't immediate that they decided that they wished to be a woman rather they wanted to understand themselves better first, not particularly moving towards a feminine point of view. Only after becoming involved in the LGBTQ community were they able to finally understand how they felt more feminine then masculine in their mindset. In the end I tend to believe that we should allow people to determine for themselves how they want to live their own lives even if it affects them negatively.
Posted by Dante Willis-Romano at 12:38 No comments:

“It made me feel very unsafe because I didn’t know what people were willing to do in that space,” Hearns, a transgender woman, told The Root, specifically pointing out that most of the violent remarks were coming from black men. “There was this macho bravado of cockiness in that space where they were allowed to say and do whatever, when the focus for me was utilizing my voice to stand up for something I believed in, which was honoring Trayvon.”
Nearly three years after Trayvon Martin’s death, there has been no slowdown of black men and women dying as a result of police brutality and other forms of anti-black violence. The responses to these killings have culminated in a wide range of movements around the country, with Black Lives Matter being among the most well-known. But some transgender women, like Hearns, feel that some of those involved in the movement don’t consider anti-black struggles like theirs.
Lourdes Ashley Hunter, who serves as executive director of the Trans Women of Color Collective, told The Root that a chasm exists between many cis black people (“cis” meaning those who identify as the gender they were assigned at birth) and transgender black women who have felt that their unique challenges regarding anti-black violence have gone largely ignored.
“I think the black community needs to acknowledge the fact that they are being completely silent about the murders that have been happening in our community,” Hunter said. “Just last year, 12 trans women of color were murdered with no response from the black community. When folks scream, ‘Black Lives Matter,’ they’re not talking about black trans women. Most of the time, they’re not even talking about [cis] black women.”
Patrisse Cullors, co-founder of Black Lives Matter, told The Root that the organization has been very clear that its efforts to defend African Americans against anti-black violence uplifts every black person, including transgender women—though she says there is room for improvement.

Christine Jorgensen is one of the first Widely recognized American transgendered woman, born in 1926 she underwent her sexual reassignment surgery in the 1950's. A famous entertainer and idol for the LGBTQ community Christine had beaten the odds of a bigoted society. What really made Christine stand out from other transgendered Americans at the time was how open she made her operation and story. Giving information to the press, the American people for the first time were able to have a glimpse into the life of a transsexual. Because of her openness with regard to her surgery she became the subject of ridicule and mocking. Many people were not ready to accept the change that she was putting in front of them, and while most put her in a negative light she was able to do so etching amazing. Many people, after her show of bravery now understood and were able to come to terms with their transsexuality. More and more people became open to the concept and slowly but surely small support communities were popping up all over America. She is an icon and a staple for the trans community and here actions were able to bring better quality treatment and lives to people with the same problems she had to face.